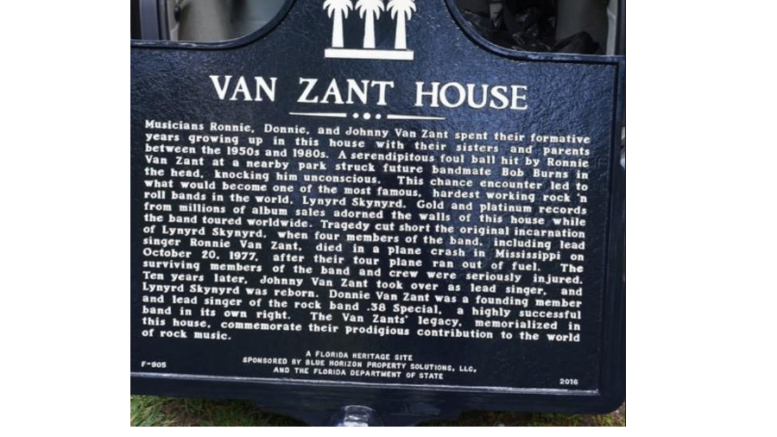 The childhood home of Lynyrd Skynyrd became a historical site on Saturday, May 12th, 2018.  A Florida Historical Marker was unveiled at the “Van Zant House” in Jacksonville, FL.

Below is the full inscription from Florida Historical Markers. We have also included a video from local television coverage in Jacksonville.

“Musicians Ronnie, Donnie, and Johnny Van Zant spent their formative years growing up in this house with their sisters and parents between the 1950s and 1980s. A serendipitous foul ball hit by Ronnie Van Zant at a nearby park struck future bandmate Bob Burns in the head, knocking him unconscious. This chance encounter led to what would become one of the most famous, hardest working rock ‘n roll bands in the world, Lynyrd Skynyrd. Gold and platinum records from millions of album sales adorned the walls of this house while the band toured worldwide. Tragedy cut short the original incarnation of Lynyrd Skynyrd, when four members of the band, including lead singer Ronnie Van Zant, died in a plane crash in Mississippi on October 20, 1977, after their tour plane ran out of fuel. The surviving members of the band and crew were seriously injured. Ten years later, Johnny Van Zant took over as lead singer, and Lynyrd Skynyrd was reborn. Donnie Van Zant was a founding member and lead singer of the rock band .38 Special, a highly successful band in its own right. The Van Zants’ legacy, memorialized in this house, commemorate their prodigious contribution to the world of rock music.”